It is rainy season here in Japan now but when the weather permits I am loading up the bike and heading out to explore. Most recently I went about as far north as possible in one day to Toyama district and enjoyed one of the best rides I have completed so far. I am beginning to know a few of the better riding roads around Nagoya now.

One is the 156 route from Gifu district to Toyama district that follows the valley. It is very scenic hugging the shore line of a large man made lake. Despite being a minor road serving small towns it still manages to have significant infrastructure along the way which never ceases to amaze me coming from Australia where large bridges are limited to cities and tunnels are very rare.

Here tunnels are everywhere in the mountains, hundreds of them within any area, 10’s of thousands of tunnels across the country. My rides can pass through 30-40 tunnels in a day on rural country roads and more on major roads which can tunnel under mountains for kilometres. Obviously Australia has been conned to thinking tunnels are prohibitively expensive given the few built were said to cost billions of dollars each.

From here you enter into the area of Shirakawa where there are many historical villages still with traditional buildings before you climb into the mountains where it almost has a European look at times.

Next you climb from the valley over a very narrow mountain pass on route 471 which is spectacular but perhaps not the best riding as it is a series of sharp blind corners with nowhere to pass or stop. Fortunately it is remote so cars are few. 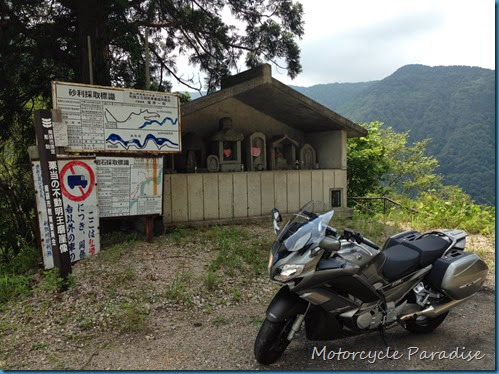 Route 41 then climbed from another scenic valley over a small pass with excellent sweeping roads before it dropped into a rural farming basin that had a certain country charm to it. However I could not stop to take any photos as there was a huge thunderstorm off to might right hand side! Despite sometimes hearing a crack of thunder I was just managing to stay in front of it. My route eventually turned and I crossed the edge of this large storm having to don my wet weather gear but only for 20 minutes before I rode clear and then had fine weather for the trip home.

Here is my route. I used the expressway to and from my start point to be able to complete the distance. I hope I can do this route again before I relocate.