I rode a BMW G310 from Johannesburg to Cape Town for a 10 day tour (link here). This is a small honest report on how I found the bike.Not going to rehash all the specs, heaps of press release type ‘reviews’ already published.Let me first say I chose the bike mostly as it was the cheapest rental model offered but I had read good reports and the idea of small yet capable bike appealed to me for the mixed surfaces I wanted to ride.Capacity might be small but the G310 does not look like a small bike. 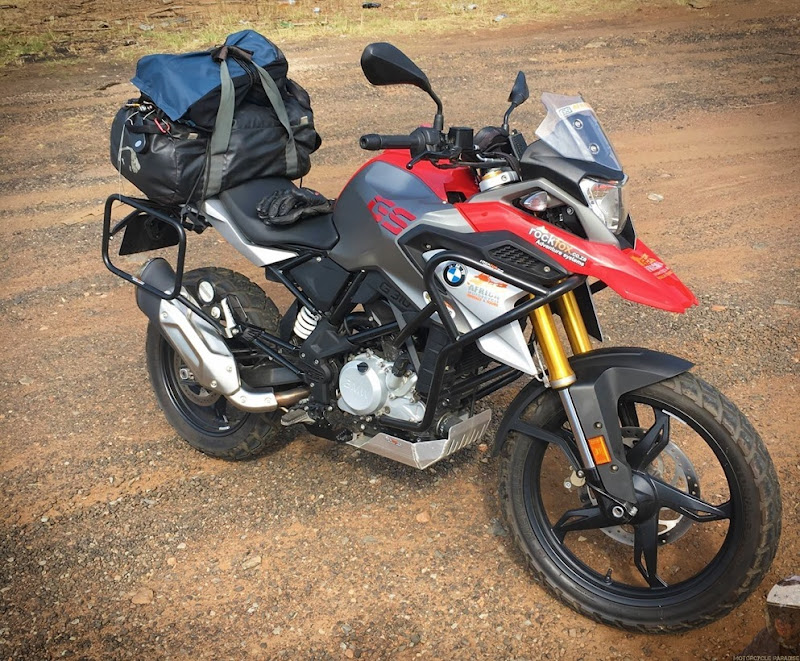 Appearance wise I think BMW have done a nice job, everyone looking at the bike asked what size was it or assumed it had a mid size engine. I did not take the cases as that cost extra but I can say they fit the bike perfectly and do not look big on the bike. Actually with the alloy side case and top box fitted I walked past one before oh wait, this is a G310.

Sitting on the G310 it doesn’t feel small either. Seat height and seat padding is good but I can still get a feet firm on ground when needed. Bars and peg position is also good. I am 6’ and found it all day comfortable as far as ergonomics go.

The bug screen is however hopeless and you certainly need a bigger screen fitted to tame the wind blast.Instrumentation is decent offering everything you need. I found the read out little bit small at times but not impossible to read without glasses like the one fitted to smaller KTM Duke I rode in Nepal.

A design issue however is the turn indicator. This is one tiny dim bulb hard to see in daylight. Many times I did not notice it on and nearly got wiped out when a car thought I was turning.

Riding the bike is smooth and vibrations are not an issue in the seat or bars. Mirrors at times get some vibration but so do the 600-800 class ADV models I have ridden.

Besides a bigger screen you want to get hand guards and grip heaters to make the bike more tour friendly if in cooler climate. The switch gear is reasonable but shows some cost cutting. The red buttons already faded on a bike that only had 4000km on it – but I see that on other BMW’s also. Rest of bike fit and finish was good. Ok now lets get to how it performs which I imagine is what many new riders are wondering.

The G310 can handle highway pace ok, I had it sailing along at 140kph on flat highway. Downhill you might squeeze a little more and up hill it will hold 120kph most of the time. This is generally wide open throttle and uphill you will at times need to shift to 5th gear to maintain highway speed still wide open throttle. Fuel economy suffers doing this. I was on reserve at 170km when blasting along at 140 for extended periods vs around 250km with a mix of riding and I saw a best of 280km before reserve with modest throttle riding in cool high country The fuel economy being talked about by fan boys online is probably BS.

That’s fine I think for what the bike is and will suit many people in many countries. For Australia this bike easy outperforms the LAMS model 650 BMW I rented previous.  The engine needs revs to get off the line and cannot putt around town in low rpms. Below 2000rpm I would often stall it in low gears and took me awhile to adjust to this but it revs smoothly.

The gear box is close ratio as you might expect with a modest top speed meaning you shift up quickly but it is a feather light clutch and positive shifting. Neutral was usually easy to find. Sound wise the exhaust is very quiet and the mechanical sounds not overly loud. You might free up a little power with an aftermarket muffler and dynojet but I have never heard a small capacity single sound good. 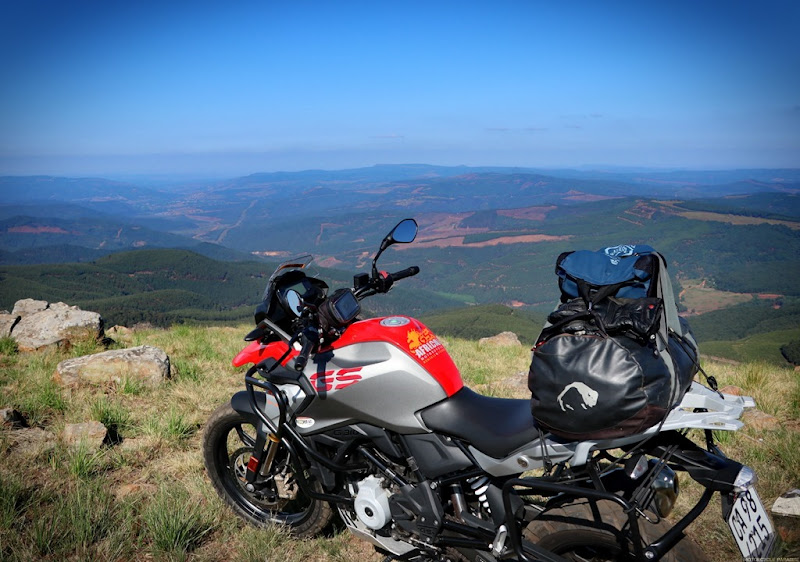 Now lets talk twisty roads. The G310 turns corners with the greatest of ease and handles far better than you might imagine.The chassis and suspension work well. Turn in and change of direction is very fast. Mid corner is planted. Of course I am not riding at sports bike speeds but it is highly entertaining and I think will delight most any rider except those obsessed with power they lack the skill to use.

The braking however is not the best. The front brake really lacks bite. The disc seems big enough, I am going to take a guess that the pads fitted might be a miss match or the brake line needs to be stainless steel to remove the wooden feel. I’m confident you could fix that with swap of pads or fitting braided line which are not expensive things. 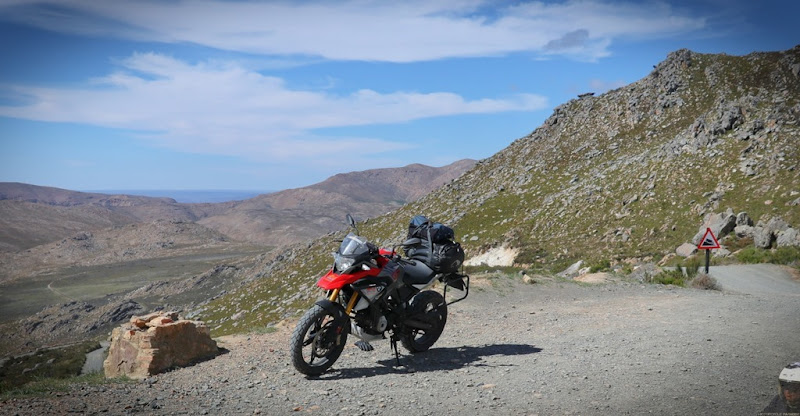 How about offroad, well again it impressed me. In addition to gravel roads and bit of offroad I went down the Sani pass on the G310. That road is a true goat track. With a layer of loose gravel and large stones it resembles a rough dry creek bed in sections and the descent gradient is very steep at the top making this one of the more difficult places I have ridden along with ‘roads’ in the Himalaya’s. A big capacity GS or Duke  would have been a nightmare, the weight would have been far too much and the whole thing gotten away from me. A Honda CR250L might have been more suiting but the G310 with only 19” front and fitted with Metzeler Tourance road bias tyres did a remarkably good job.

On regular gravel roads like the Swatzberg pass it was terrific, very easy to ride and at no point did I wish to be on something else. I started fooling around and spinning it up out of corners just for fun. Confidence inspiring bike on or off the tarmac.If doing more off road then you could fit dual purpose tyres and gain some little extra capability however if really riding off road then the 250cc bikes with 21” front wheels are going to be better where as the G310 deliver far more on tar. 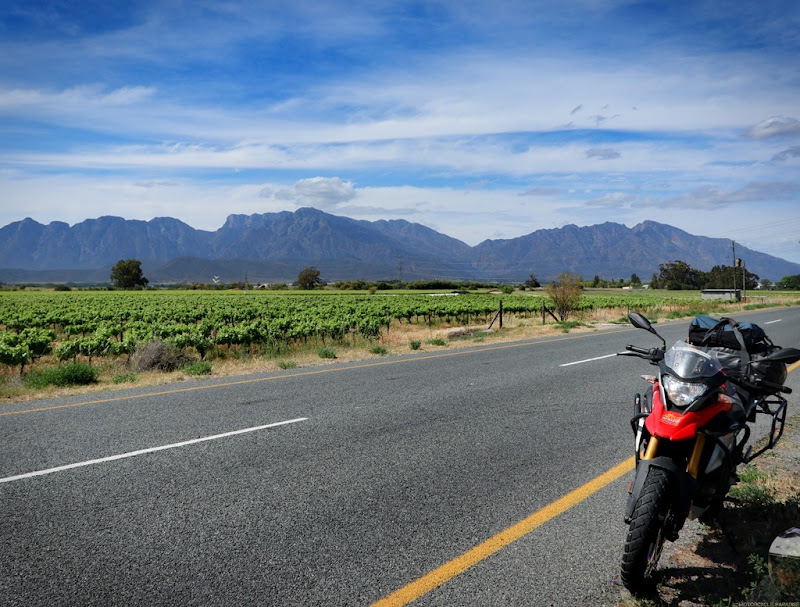 To sum up then I enjoyed riding the G310. There were a couple of times I could have done with extra power on highway but this was more than offset by having a light easy to handle bike on the gravel and in between riding the many canyons and mountain passes of South Africa the power was never an issue and the nimble handling very enjoyable. The headlight blew but no other issues.

This is the first BMW I would consider buying as I can see myself moving more off road. I would certainly choose this over any of the large capacity SUV ADV bikes. But perhaps not in Japan where over 250cc bikes need expensive compliance certificate every two years and sub 250cc are exempt which would make it very tempting to me. However it’s a good bike and if you are in market for something to go off road then 158kg this is the one, its manageable even on very difficult stuff where as all those 200+kg bikes are not and the 250+kg Winnebago’s really do belong at Starbucks as people like to joke.