If you have ever parked your motorcycle facing downhill then you may have noticed it can creep forward and if left it can roll enough to have the side stand fold up and the the bike fall over. While it seems not able to move at first because you have it in gear a steady pressure applied will transfer through the drivetrain and can turn the crank of the engine or some motorcycles can simply pop out of gear.

At best it will lead to some minor damage, a bent or broken mirror but an awkward fall can break the foot peg, clutch lever or as I know having done all the dumb things cause a lot of damage to a rental bike. You could easy find yourself stranded.

The best thing is to always turn around and park facing uphill as a motorcycle will not roll backwards if securely parked in gear. However sometimes on tour I have been on roads that it was impossible to turn around. I will then park my motorcycle with the front wheel hard up against something if possible like solid road post or guard rail. I have also wedged a rock from side of road under the front wheel on other occasions kicking it away before I remount. But there seems to be at least once on any tour I want to stop somewhere on a slight descent where nothing exists to hold the bike and grabbing a quick photo presents a risk.

Some of those famous motorcycle vloggers report using a hair band to hold the front brake on but their fooling themselves to think an elastic band can apply sufficient force to the lever to apply the brake in a meaningful way.

Then I came across this item purpose made for the task. 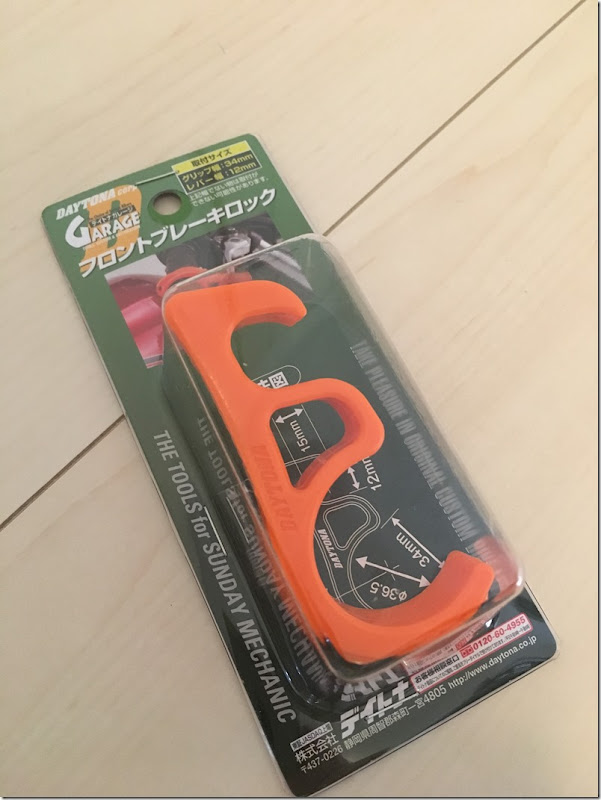 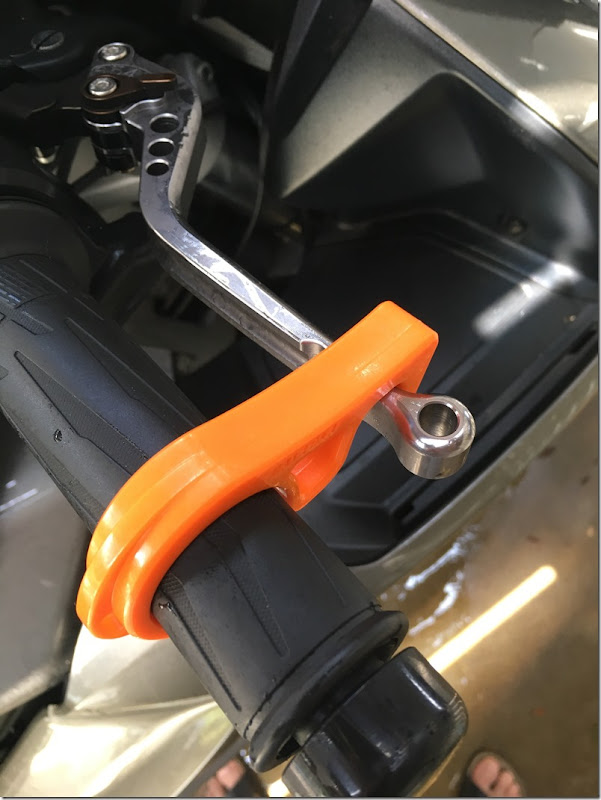 A front brake lever hold device. It is simple to apply, the design or shape is not random but quite clever for easy operation. First pull lever then fit to lever and roll on to grip to hold the brake on firmly then reverse to remove. It is so small I can place it in the FJR’s glovebox or keep in one of my jacket pockets. Just the thing I needed for when I simply must take a photo but the road is divided or too narrow I am on a bridge or other scenarios. Cost was about $6.00 delivered from Amazon.

Update – used this device on my Tsushima tour and it came in handy a few times, terrific thing for people who just have to stop to grab some quick photo on roads where parking uphill are impossible.
Update 2018 – this has proved again to be very handy. On some narrow roads on my tour this year it was impossible to turn a bike as huge as the FJR around on steep one lane decline but I wanted to get a photo so simply used this which I keep in the FJR glovebox handy. I also used it a a road closure where I had to wait 30 minutes on a down hill section and had to park where directed. Without I would have had stay on the bike as no rocks around to chock the front wheel, this made it easy to get off and relax.