I purchased the Alpinestars Transition gloves when I was riding in Spain a couple of months ago. I arrived in an unseasonal cool week and after one day of riding with summer mesh gloves I realised I needed better protection from the elements to continue. 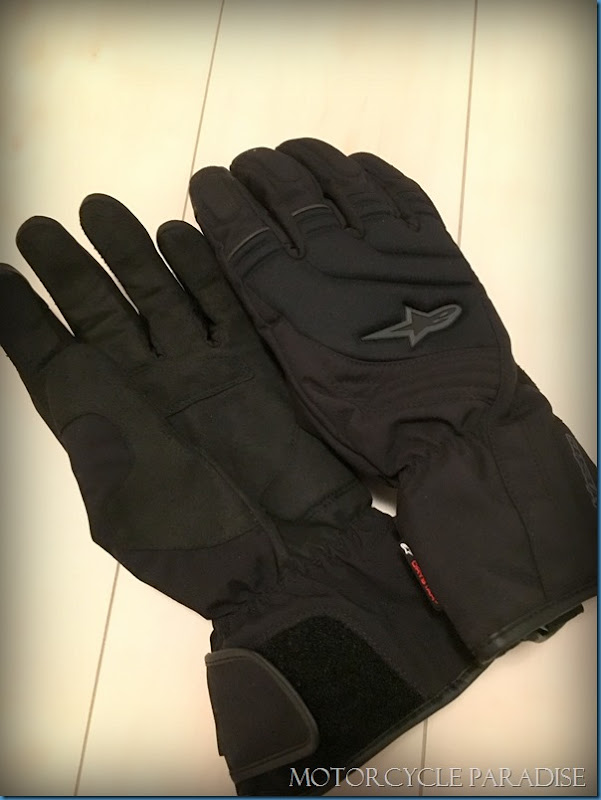 I already possessed what I considered a suite of gloves so did not want to buy anything new but decided if I could find something lightweight yet waterproof and mid season at reasonable price then that would be a handy combo to have with me for future travel and this is what the Alpinestars Transition DS seems to be aiming for. They are a light weight non leather glove which I found in the urban riding gear section of the shop aimed at city and scooter riders. The glove is made from fabric and there is no technical data to confirm how abrasive resistant the material is. It has Alpinestars version of Gore-Tex they call Drystar (which does not work) hence the DS in the name and has 3M brand insulation for warmth. There is synthetic suede on the palm and touchscreen compatible patch on finger and some thin foam padding. There is no hard plastics or armor.

Comfort wise they are excellent but a little more bulky that I imagined a light weight construction glove would be and not in the same league as my Held Rainstar mid season gloves (which are over twice the price). They are also quite warm, perhaps as good as my winter leather Held gloves but having a Gore-Tex type liner means breathable and so I never had sweaty hands and was able to wear them right up into the hot part of the day. As far as being mid season I think they do a good job but lean more to cold riding. Like my Held Rainstar gloves these are wearable over a wide temperature range but really are neither winter or summer gloves.

I have experienced light rain in these gloves no problems but so far not all day or heavy rain. No doubt that won’t be far off as I am soon to embark on another tour in Japan and will update this review accordingly. (Update, well that did not take long to test haha, yes they are ok for short while in heavy rain but then will leak, ok for a storm not for a raining day)

These non leather gloves dry out much faster then my Held Rainstar gloves which is an attractive feature for touring overseas where I would not have the luxury to carry two pairs of rain gloves like I do here.

In New Zealand this year I needed to use the hotel hair dryer on my Held gloves repeatedly over course of a couple of hours one night to get them dry and it was fortunate that I was in a decent hotel that had such an item that night otherwise it would have been soggy gloves the next day. These air dry quick and being fabric I will also be able to throw them in washing machine and clothes dryer occasionally without too much concern. On the flip side being only fabric the crash protection is going to be less than the Held leather and armor gloves.

Update, well the water proof qualities don’t seem to last with Alpinestars Drystar gear. First time ok then later works less and less. This has been my experience with these gloves. But if I spray them with waterproof type coating that goes some way to restoring the water resistance.