I have been testing an action cam on my last few motorcycle tours and it is about time I posted a review. Polaroid is a name I associate with polarized sunglasses and instant cameras. In film days their cameras were very popular and remained so right up to the early digital days being able to produce a ‘print’ of the photo within a short amount of time using self developing film. My friends mother had one, it was ok daytime good light if the person using the camera knew how to compose correctly for the cameras lens and film format. At night it had a weak flash with those old bulb flash units and party photos were poor.

I got a autographed Polaroid photo with a celebrity Iron Chef in Tokyo on one of my first trips to Japan (and chose that alias to write this blog as a bit of fun) and that Polaroid was a more modern version that worked quite well. Polaroid like Kodak were in a success bubble when digital came and now are just shells of their former selves but the name lives on with the Polaroid Cube 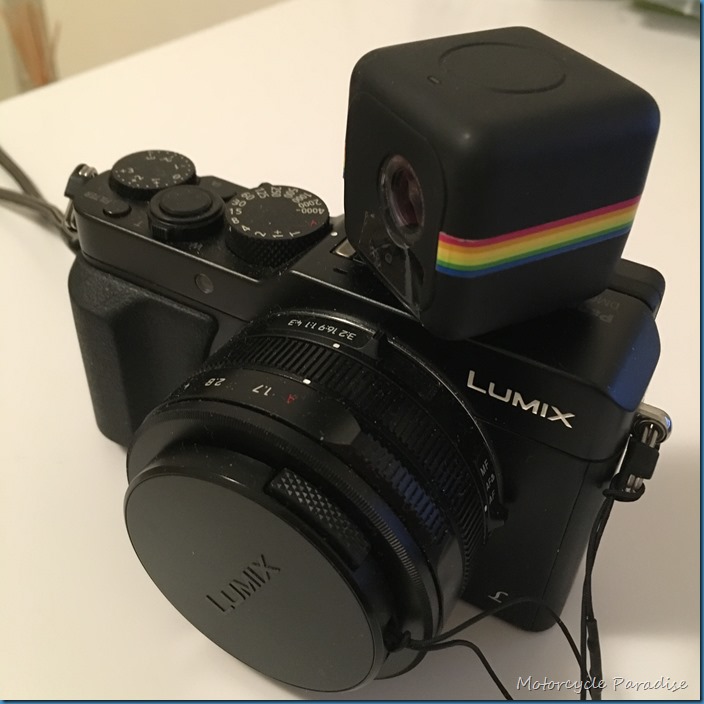 The cube is a tiny thing above pictured on my Lumix 100 (with some tape placed over the microphone as this is useless when moving on a motorcycle and generates high wind noise)  In a rubberized type housing it is said to be shock resistant and having dropped it off the motorcycle a couple of times onto the road I can confirm that to be true. The rainbow stripe is the original Polaroid branding being applied not a pride rainbow as a couple of reviewers have written who probably are too young to recognize it from the original instant camera. If I recall the rainbow was used in advertising with the slogan all the colours of the rainbow or something like that. Colour reproduction was a weak point on early instant film cameras. 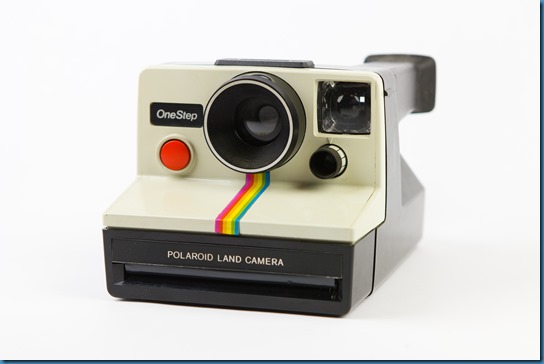 Back to the now and the Cube base has a very strong magnet which is one of the things that attracted me to the product since you can stick in on any metal item on the motorbike like the tank and it will sit there no problems. To mount it on my helmet or plastic parts of the bike I have simply used high strength double sided tape (like the thick 3M stuff for mounting wall hooks) and a few metal washers.

The Cube and the tape have held fast on all sorts of roads up to highway speeds and been through rain and the mounts are still firm. Cost was just a couple of dollars, nice and cheap like the Cube itself was, sourced cheaply on eBay. The operation of the cube was another thing that attracted me. There is a large flush mounted button on top and to turn on you hold for about 2 seconds, it then beeps and shows a green light to indicate it is on. To take a photo press once, to record video press twice then once more to stop recording. This easy operation was a major thing for me.

Some cams I have looked at you need to switch some small button for power then select still or video before you then record using another button, not practical on a motorcycle. I can pick the cube up from its usual resting place on the top of my fuel tank and operate it without taking my eyes off the road and can easy turn it backwards to face me or off at an angle. That allows me to get something other than the boring top of helmet POV video that action cams usually produce with motorcycles.

I have found that being so small I can hold it at handlebar height and this is better than up high or behind the screen. The results have been mixed. There is an issue with the still camera mode where it takes a second from pressing the button until it actually takes the photo so often the shot is not what I pointed it at and was expecting. I sometimes get a good photo by pointing and holding it still while I count one, two slowly before moving it but this is a really poor function and no idea why it would have such a long shutter delay. Still photos in bright light are ok but in overcast cloudy conditions it performs poorly.

Here is a selfie photo taken in broad daylight which is what the Cube does reasonably well. 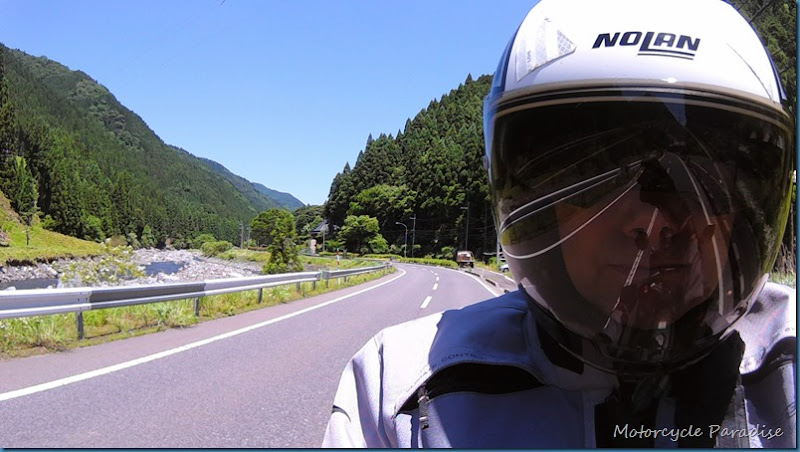 But then overcast day and look what a mess it makes of the details even standing still. If moving the overcast day photos are worse again. The overcast days in Japan are really gloomy so to be fair people using the Cube on there regular day rides I think would find it ok. 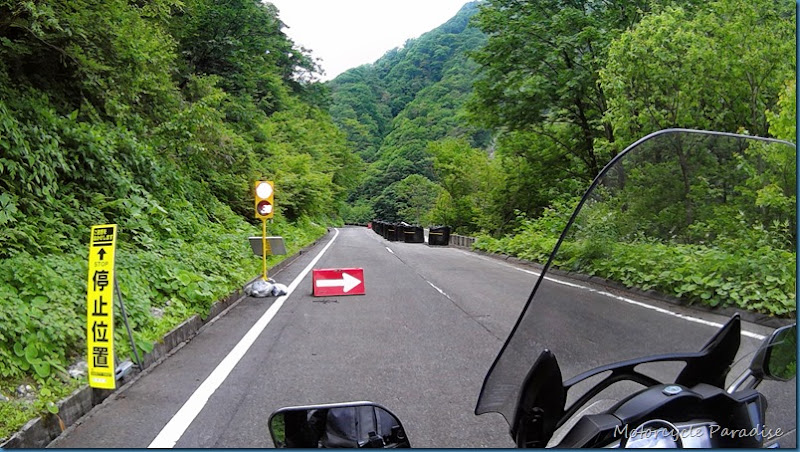 Here is an example video I shot in Spain in partly sunny weather. You Tube further compresses videos and what you see here is much less than the original footage. In less than ideal light the video performance is clearly better than it’s photos. In broad daylight the video quality is better again so for many people I think it would be acceptable. Video is either 720 or 1080 but I cannot see any difference in quality once uploaded on You tube and manipulated on there. To alter the video recording you flip a switch behind the rear cover that can be opened with a coin. Here also is located the micro SD card slot and the usb port for charging. 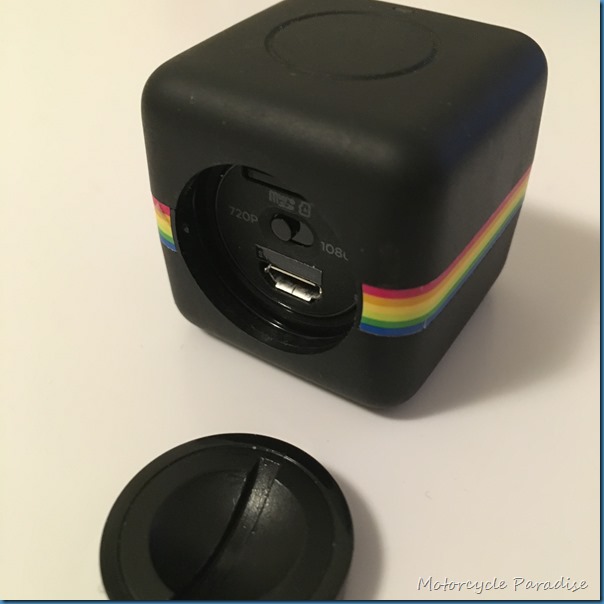 Another issue is it gives no indication of charge level and when charging no indication of when it is fully charged. I leave it over night then when I unplug it from charging it shows powered on and does not automatically turn itself off after some minutes of no use as it will after normal use taking a photo or video on the road. In that situation I simply put it back on the tank using the base magnet to hold it and the light goes out in about 2 minutes.

The battery will last me two days on tour mix of video and stills and is surprising considering how small the device is but YMMV. A few other settings you edit a file that it reads/writes to the micro SD card when inserted. Nothing really further there of use to me besides the volume level for the beep when activated. The Cube is supposes to auto rotate the video.

If you start video shooting with it stuck on side of something then it should rotate not shoot in portrait mode but I have only managed to get this to work one time out of many attempts and since on tour there are no retakes of things I have given up on this for now.

So how to sum it up. I had been looking at action cams for quite some time. Together with my mate we tested a GoPro action cam on the New Zealand south island tour in 2011 and the results were woeful so that did not inspire me. My mate who had that camera found it so awkward to use on top of his helmet fumbling to turn it on not sure if it was recording. Then he gave up on the editing process giving the hours of footage to me which I edited to about 5 minutes of typical boring top of helmet video.

There is a big difference to POV footage shot with a wide angle action cam to that shot professionally using a drone overhead or by second person off to the side able to move to frame the rider and using quality camera equipment. That said the Cube is a bit of fun for me while riding and despite the issues I am still pleased for the price to be able to ‘test the water’ regarding action cams. I cannot stop everywhere so sometimes I try take a photo passing by with the cube.

It occasionally does a good on bike selfie and I think it would be great in a ride like the Philippines with crazy stuff in towns. I never wanted a action cam simply stuck on my helmet or bike so have waited until things like this arrived that give a little more creativity however the image quality leaves something to be desired and I am reluctant to do those voice over type ‘this is me riding’ videos that are so popular.

I have wondered about video blogging a few times. It seems even the simplest amateur vlogger channels on You Tube have audience that are 10 times magazine sites although I wonder how many people actually watch the videos through as all appear boring to me. The written word and still images now seem to be edging closer to being out of date for the majority. Not as much as the old Polaroid instant camera above but things are evolving quickly online.

5 small items to help you enjoy your ride