Update 2019. This was posted quite some time ago and since then Held have expanded from a select range of gloves to so many it is confusing as well as full range of rider gear, but feedback I have on the new Held gear is not as positive as the original made in Germany items. Original post below:


At the risk of sounding like a Held Gloves fanboy – the Held RainStar gloves are truly the best gloves I have ever used and exceeded my expectations by a large margin.

I have gone through a number of gloves, more than most people because I have that dermatitis issue. I need very comfortable gloves that will not chaff in even minute amounts. What seems comfortable can still rub a bit and then I have medical problems. The gloves that are lined are a level above unlined gloves for comfort but these are mostly limited to winter use. Besides being obviously too hot for our summers perspiration is another enemy for me.

The Held RainStar gloves have a pique push pull liner with something they call Outlast which is a phase change material. The thinking is the material can hold or disperse heat to regulate the temperature in glove. Now this to me sounded like advertising spin so I did not buy the gloves for this idea whatsoever – but they may be onto something. Riding New Zealand I never had to use my glove liners despite riding in very cold temperatures and the gloves were comfortable on warmer days as well. Back here I wore them on that freak Sunday in November that hit 35 and they were more comfortable than they had any right to be.

The Gore-tex lets them breath well and this is a key element to their effectiveness. I might also be staring to believe some other marketing spin – that says Gore-tex is superior to the other material used in waterproof rider gear. I know that gear I have with other brand name waterproof material simply does not breath as well.

Safety wise they have all you would expect and I won’t go into the multiple layers. Not a cheap glove, I purchased from Revzilla in USA, who I can recommend, these are probably gloves for someone with either a need or desire for the very best and willing to pay accordingly. 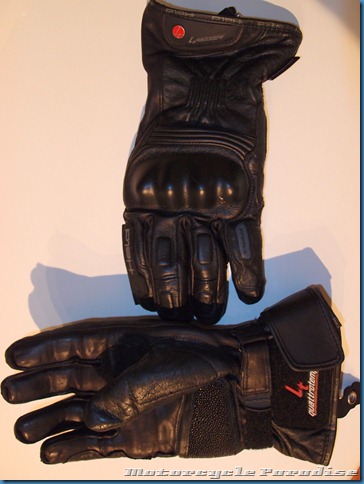 Update, still in regular use 2018, getting old but still ok.