A small update here while I am not riding. I decided to look for a new helmet but despite being in Japan am not taken with any of the jet style helmets on the shelf here. The Arai and Shoei are comfortable but lack venting compared to my Nolan N43 Air.

The venting on the N43 Air is far and away superior to any other helmet I have ever worn, it has that huge evaporative area on the top which I have not seen on any other helmet. The guys at Webbikeworld also say it is hard to beat for cooling and they have tried more helmets than probably anyone.

I was looking for the Nolan N44 as a possible replacement but so far am unable to find it here except online but would like to test the fit before buying as that is really the most important thing with helmets.

So I thought I will try get a little longer out of my N43. I pulled the liner out and the rest of the helmet was still in good order. The visor has a couple of scratches but nothing major. The shell and inner foam, strap buckle and air vents all in good order. It has not been in constant use as a daily rider might use a helmet so despite being a few year old it does not have a few years of wear in my opinion. 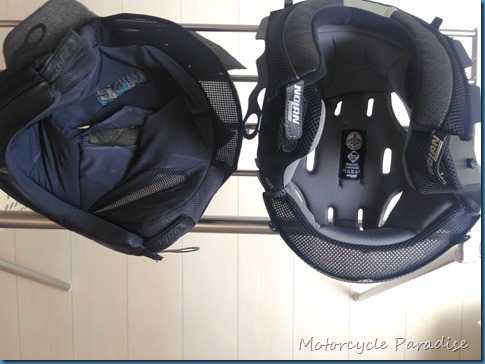 The liner however was another matter. It was intact when I removed it and actually looked deceptively not too bad. But it fell apart in the washing machine, here it is on the left next to the replacement. The new liner cost about $75 which is crazy but then a new helmet is about $400 so it is all relevant.

With the new liner in the N43 feels (and smells) like a brand new helmet. The liner is not just a inner layer replacement but also a realign as the old one stretches in certain parts and the liner has soft foam padding in areas all of which had altered in the old liner.

Well I think it is good for another ride season or year at least but then I will be shopping for a new helmet.