I’ve been doing a few rides north from Nagoya towards Nagano. The high alps in Nagano are a bit too far for one day but there is still plenty of great roads to enjoy along the way. Getting out of Nagoya is still a challenge but I now know the expressway system well enough on a couple of the routes I use to be able to ignore the hopelessly inaccurate navigation provided by my Garmin. I have been taking the expressway to Ena west of Nagoya and from here there is some scenic valleys that run north.

This leads into me the Gifu region and from the main route 41 there are a number of minor routes north west which are scenic but end up becoming narrow one lane roads.

Lots of expensive infrastructure often sitting in the middle of nowhere. This bridge is a long way from anything on an otherwise minor country road.

Nice spot for a picnic lunch. The rivers and streams are all engineered no matter how far off the beaten track you are. I never saw another car go past while I was stopped here on route 86.

Japan has it’s own series of road signs which can be found on smaller roads but sadly are being replaced with the universal black on yellow diamond road signs. I much rather the Japanese versions and will try photo some more of them. And now I was getting closer to the high mountains that lie in Nagano region. You can see some of the road ahead below in the photo.

There are some high dams in Japan and this is just one of them I have come across. Check the full size coach driving across for a size reference. 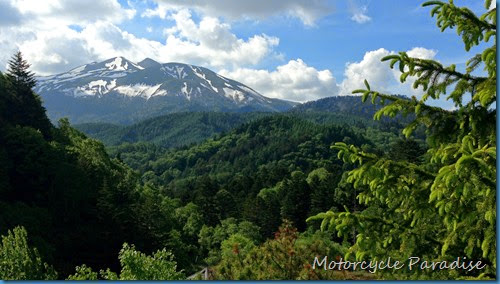 Still snow around on this outing and bit cool in the higher parts. 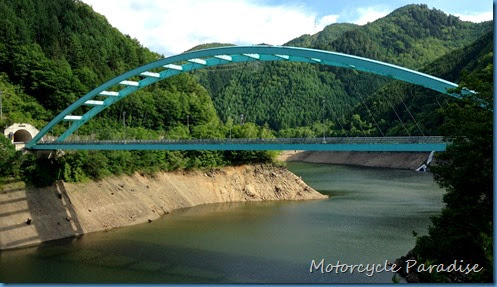 This bridge I arrived at from a junction with the very twisty route 34 which was perhaps too tight in spots for the FJR. I find the bike is often bigger than I can manage on narrow tight roads and end up crawling along as it is too much effort to try drag it through switchback corners. I explored the 361 on another ride and it is also very scenic. Many small villages dotted along the valleys. Here is this rides interesting street lighting photo.

Coming back I found a popular motorcycle road route 73 south of Takayama. Lots of sweeping corners which suited the FJR, Very enjoyable. No translation needed on the sign.

Riding back to Nagoya in the Gifu region it is impossible not to feel uplifted in this  beautiful countryside with lush trees and crystal clear streams.

Lots of fishermen in the rivers. Some spots you can see dozens fishing for the small river fish that are so popular eating in Japan. It’s summer now, 30 degrees plus and that means needing to keep hydrated when riding and so I have been glad there is always a vending machine to grab a cold drink. This one in front of a abandoned building on a nice gentle country road (shown in following photo). This sort of road suits the big bike and I very much like the long range and electric screen if only it didn’t feel like it had a side car when trying to make it go round tight corners.

Many sections of road have flowers or other ornamental plants. The people of Gifu really care for their part of the world.

Roads often go from two lane to one and back to two without warning.

There are so many abandoned houses and shops in Japan. Tens of millions of houses and an unknown number of shops closed. This old holiday retreat building was located in an island in the river and under the overgrowth looked like it was once a nice place.

The following is just typical of the sort of views and curvy roads that abound in the Gifu and Aichi prefectures once away from the large city areas. it is hard to stop riding once you are in these surrounds. In fact only running out of daylight stopped me, the last photo was taken near 6.30pm.

So ends another fabulous day riding in Japan.