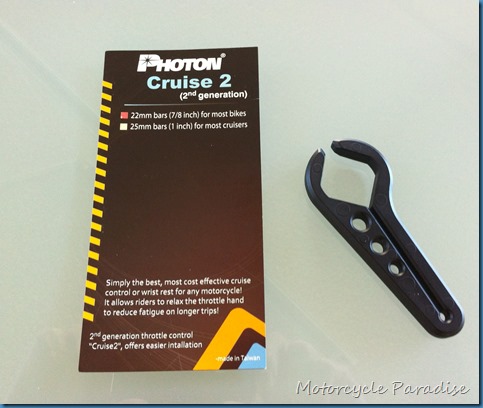 Despite my previous poor results with a Vista cruise control for motorcycles (which was really throttle lock device same as this is) I have decided to try another design since I have a large Australian tour coming up soon.

The Photon Cruise 2 is a small device that clips on to your handlebar grip and to engage you simply use your finger to press it forward on to your brake lever. (See the next photo to visualise) You can get them on eBay for about $20 and fitting is just a few seconds. 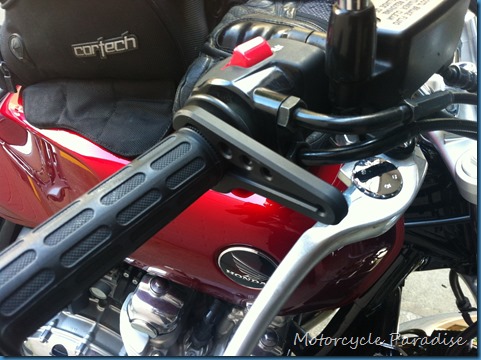 To disengage you are told to simple wind the throttle forward and the device will slip to allow the throttle to close.

Bumps and vibrations perhaps play a part and on smooth road I did get it to hold a couple of times and then as with any throttle lock you are then either accelerating slowly or decelerating slowly but never maintaining a steady speed since when riding we make tiny adjustments to the throttle to maintain a steady speed against varying resistance of wind and gradient. Despite that a short relief from wrist cramp on a long tour is still of value but nothing like the mile crunching power that electronic cruise delivers.

(Update: I have managed to get the device to grip better by adding the rubber ring that is provided for metal grips but the speed of  course remains always falling or accelerating)

The Photon is easier to fit and engage than the Vista but so far does not actually work that well. It is not intrusive so I will leave it on and give a long term update after my tour.

Related to this (and as readers might know) I previously also tried the wrist rest Throttle Jockey and Crampbuster devices on tour but found them to be too intrusive. To be able to rest your wrist at highway speed throttle position the device needs to be installed angled up high towards the sky at low speed throttle positions. (or if fitted flat as in the marketing photos it ends up pointing down to the road once the throttle is open) It is very easy to accidently open the throttle more than you wanted at low speeds when fitted as needed so I gave up trying to use them.

Update – well this device never worked well when it gripped well enough then it also was not easy to release and then it simply split in two and that was the end.