Yes I ended up buying one of these from BikeBiz, half price seemed too good a deal. So now I seemingly have 3 helmets however none are without problems. I retired my old Shark RSR1 to back up duty after the fall in Japan. The Nolan N43 is a great summer helmet, it flows so much air, but it is not as good in winter due to fogging and is a little drafty Vs the RSR. 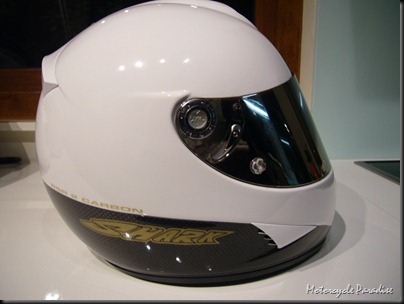 And so to my new Shark RSR2 Carbon which unfortunately has problems as well. This helmet is mostly the same shell design as the RSR1 however the cheek pads are uncomfortable on a long ride and I think I will need to order smaller replacement pads. Reviewers had spoke of this but I thought it must have been a personal thing. Update, I ordered what was listed as thin pads but seems they are same as originals so was wasted effort. 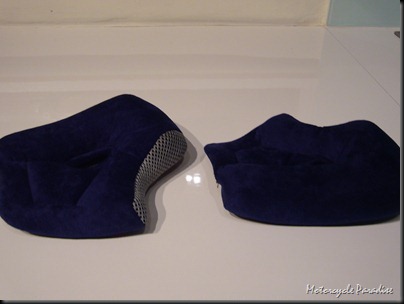 Comparing to the RSR1 the Carbon is incredibly light, it is perhaps as light as a open face cheap plastic helmet yet is one of a select number of five star safety rated helmets currently on sale. Shark say the viewport has been increased from the RSR1 and yes you can see on the side the RSR2 has a slightly larger opening being more squared off on each side in front of the visor attachment. Vertical viewport appears unchanged and the visors are the same size so it is a modest improvement. Update, really no change here from before. I don’t mind the shark design but if you did not like the RSX-RSR previously then keep looking as viewport is same and compared to the N43 it is restrictive.


Venting is the same as the RSR1 albeit with different mechanisms to open and close the vents. The RSR1 has a medium amount of air flow in summer, less cool than the Nolan but quieter, and there in lies the tradeoff as more air equals more noise. The Shark venting is superior to helmets I have previously owned like KBC and AGV which had vents with no corresponding opening in the foam liner for air to reach your hair.

The visor attachment system is unfortunately more complicated than the RSR1 and in my opinion rather weak in comparison to most helmets. I don’t change visors choosing to use a tinted visor all the time and not riding at night but if you are someone who does like to change visors then the Shark system is time consuming and fiddly and like Arai there seems no reason other than stubborn pride not to adopt a more modern system.

Underneath the helmet there are two side skirts on the lower edge and another at the chin. These reduce noise much like the Windjammer helmet skirting I reviewed some time ago and the side skirts will rub against your ears when putting on and taking off same as the Windjammer. 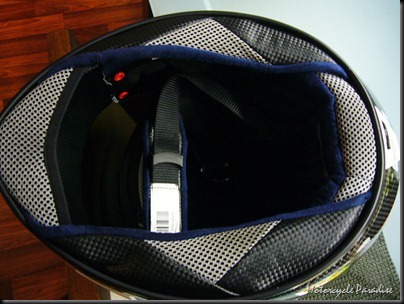 On the road it is a bit quieter than my RSR1 which is not a noisy helmet to begin with and I think the extra comes from the side skirts. It is very stable like the RSR1 and of course so light you feel no strain or fatigue.

Overall it is a quality helmet with a couple of quirks that some will find frustrating. Brilliant carbon fibre chassis that weighs next to nothing yet fitted with an antiquated visor mount system. Flawless finish and yet an obvious miss match in the cheek padding material in the large size helmets.

Update: Apart from the cheek pads I am fairly happy with rest of the helmet so far. Really enjoy the light weight. I installed my old Shark RSR1 tinted visor to replace a crap iridium one I got from Hong Kong that peeled first day and here is a tip – if you have not had a Shark tinted visor before then their regular tinted visor is so dark that is difficult to see the road surface in winter shadows and their light tint one is not enough to filter glare and stop sunburn so you need an aftermarket item and these vary in quality dramatically.


Further Update Feb 2012. After the first few uses the helmet has mostly sat on the shelf due to the design of the internal cheek pads. I had stuffed it full with a towel inside and left it a couple of months to try mold the pads but they remain less than ideal. I have broken 2 or 3 of the plastic ring clips for the visor when changing from a light tint to a darker tint. This has to be the worst visor retention system I have ever encountered, very fragile and difficult to use, I spent 30 minutes trying to change the visor last night and today it whistled all day somehow not sitting flush on one side, back to the shelf it goes.