After repeatedly getting wet recently I have come to the conclusion Gore-tex rider gear totally loses its water resistance over time.. Yes I probably am the last person to realise this, I usually am with many things.

My experience has been that the gear works exceptionally well the first ride season then the water resistance next season is slightly less but still passable if not all day rain however from there on it no longer works so well and gets clammy inside and damp right through after 3 years at which stage anything more than light shower or short exposure will defeat the garments. This is not limited to just one item but has been repeated on two riding outfits affecting jackets and pants of both as well as three pairs of Gore-tex gloves. From what I have learned online the outer waterproof coating fades and washing detergents may accelerate this. So what you say – its the Gore-tex membrane that stops the water entering right? Yes and No.

Surprisingly it seems the Gore-tex only works if the outer shell is water resistant – which has me scratching my head doubting how effective Gore-tex actually is if it relies on another shell to stop the water ….?  There are various wash in treatments but I have read that I should use a spray on treatment to my jacket and pants as the wash in may restrict the breathability since it waterproofs the liner and every part of the garment. So I have obtained the Nikwax TX spray on treatment and Nikwax leather treatment and will let you know how this goes when I am riding in rain again which will no doubt happen in coming months. 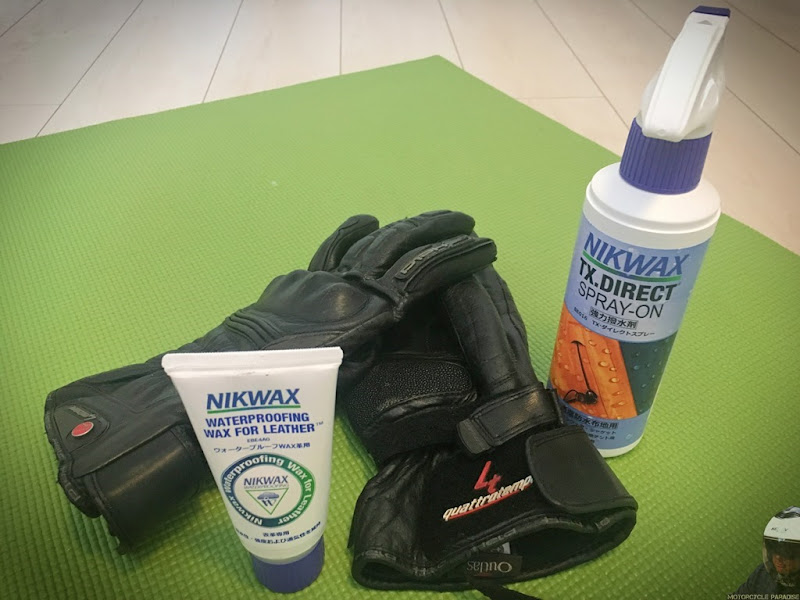 Update. The spray on treatment despite being 300ml was only enough to treat my jacket. The textile material requires a lot to make sure it is thoroughly coated.The leather treatment on the other hand goes a long way. I worked the cream into the gloves and my boots and have enough to treat same a few times again.The gloves and boots look great and the treatment is also like a restoration of the gloves, very pleased with that instead of buying new pair. Initial test in the shower is a pass, water beads up and rolls off easy.

Results after real test in rain.
The spray on treatment for the jacket did not work. In rain the jacket became clammy and damp inside same as before treatment. The gloves however faired better. They lasted a few hours before starting to get clammy inside but never became damp through and never soaked up lots of water as they were doing prior to the treatment.