Besides exploring the world on two wheels I have a few other interests. I dabble in photography and for a long time was interested in architecture. I thought about pursuing a career in that direction but wound up creating computer simulations of train networks instead before deciding to hell with corporate life. So anyway when Yamaha asked if I would like to attend their design exhibition I was interested on a couple of levels but I’ll try keep this post mostly about two wheels.

At the exhibition Yamaha Motor and Yamaha Corporation showcased different projects where the designers of motorcycles and the designers of musical instruments have collaborated. First of all I was invited to try the ‘&Y02’ – a auditory movement experience device. 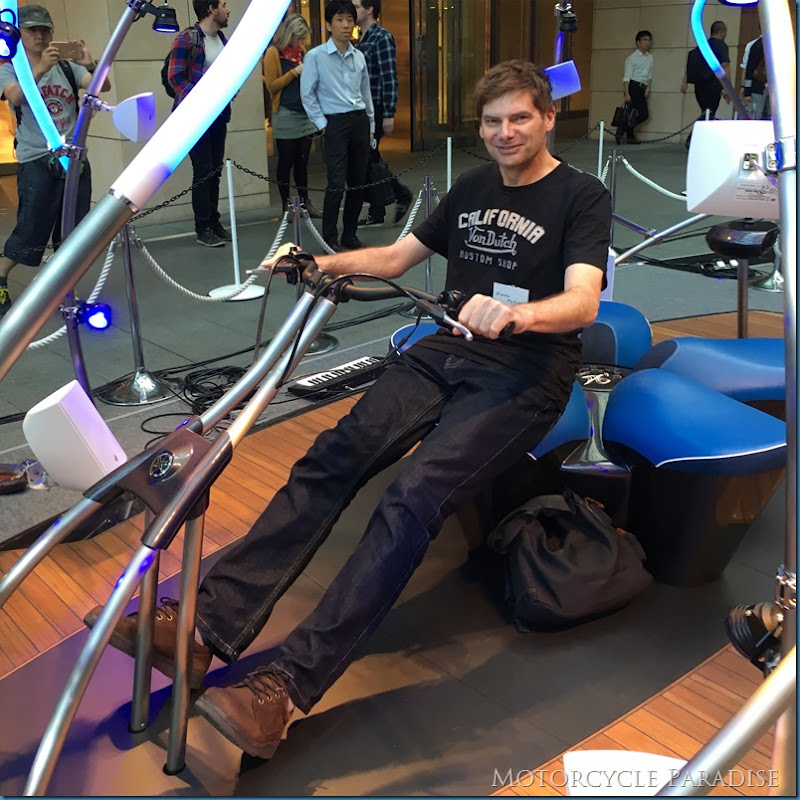 Very hard to describe this fusion of instruments and motorcycle controls but you are surrounded by speakers and alter the music and the sound field by how you move and operate the controls. So for example my revving the throttle altered the pitch and distortion of an electric guitar which was being mixed into the backing track. I have no musical talent but people who do later showed what it was capable of. 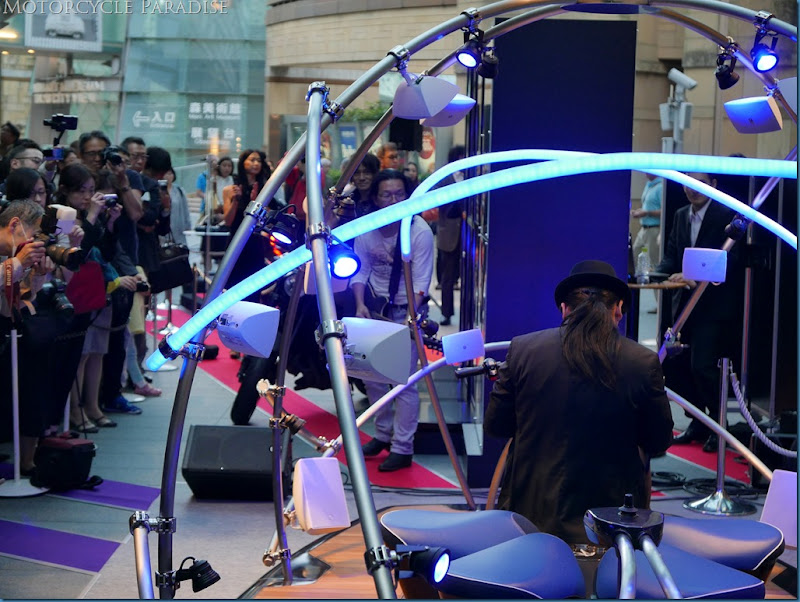 Of the products exhibited I think the most beautiful design for me was a Japan debut of the ‘04GEN’ scooter. However this Yamaha electric violin YEV was also remarkable. 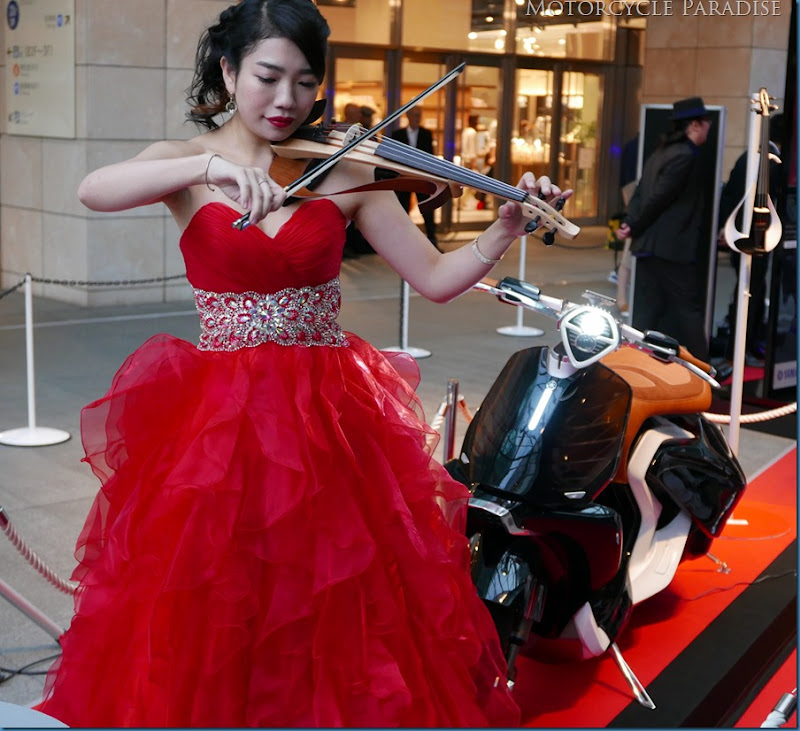 Taking a closer look you see there is a lot of attention to detail here. Almost every element has been designed to have beautiful form. What my photo does not show is the rear lower side panels are slightly translucent to enable a glimpse through to the rear chassis. I kind of like it how my photo shows in a solid glossy finish with the chrome trim on the guards evoking thoughts for me of the mid century automotive era when so many classic cars were designed. 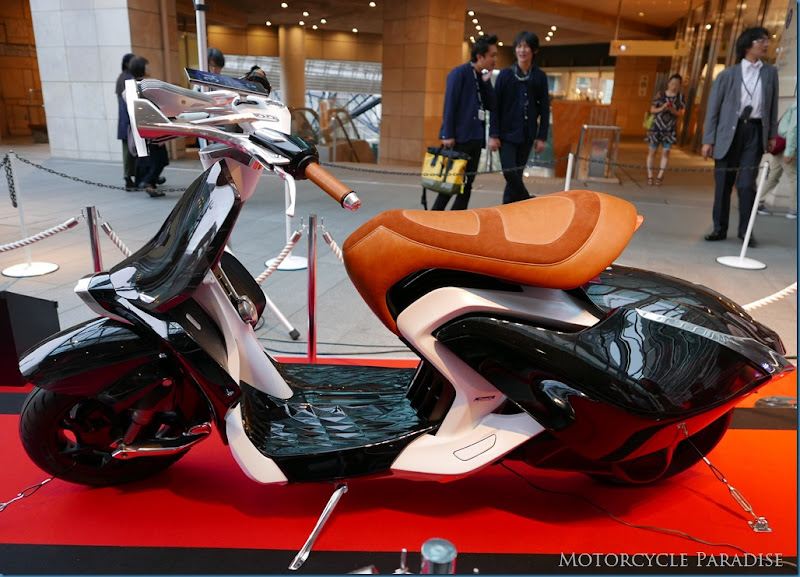 Having spent some time riding around SE Asia on various small capacity ‘motos’ as people there call them I have come to view clutch less machines simply as smaller motorcycles, no longer separated in my mind into a lessor category of scooter. I guess you need to spend a lot of time in areas where everyone rides and all bikes are 125-180cc because more speed is pointless with the road conditions. Some guys see riding as a macho thing but for me riding is freedom and enjoyment so I enjoy riding clutch less motos/scooters as often as possible. 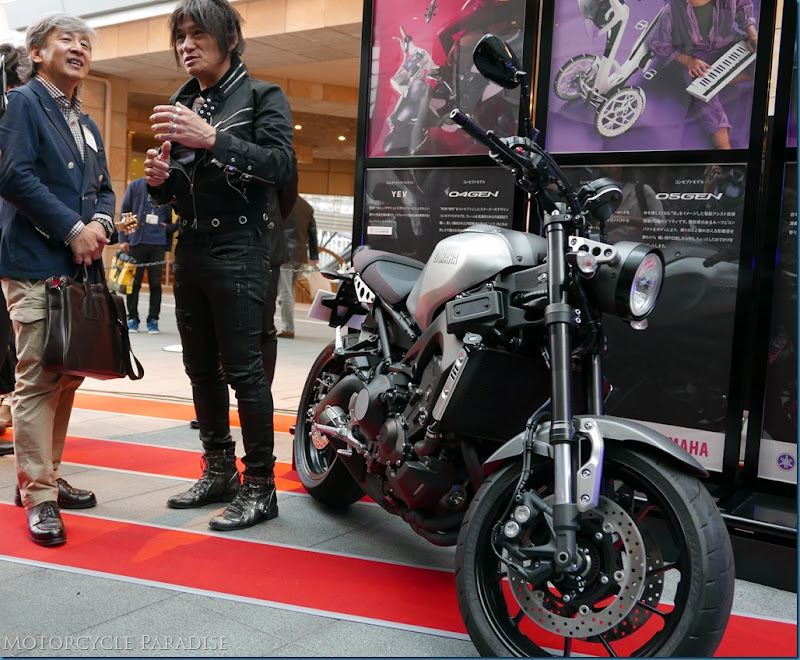 If I was living somewhere easy to do day rides then I would consider a Yamaha XSR700 seen here with the head of motorcycle design for Yamaha Motor (in leather). This motorcycle draws design elements from the Faster Son custom built by Shinya Kimura in collaboration with Yamaha.

The look is a mix of retro and yard build and you need to see it in real life to appreciate how the brushed aluminium fuel tank ties the other metal finish items together as the detail of the finish is lost in photos. I have ridden many mid size engine motorcycles and it’s the capacity I actually prefer now days despite owning a larger bike. (nobody is making a mid size tourer). It’s nice to be able to exercise an engine often rather than have so much power that can rarely be accessed on public roads. 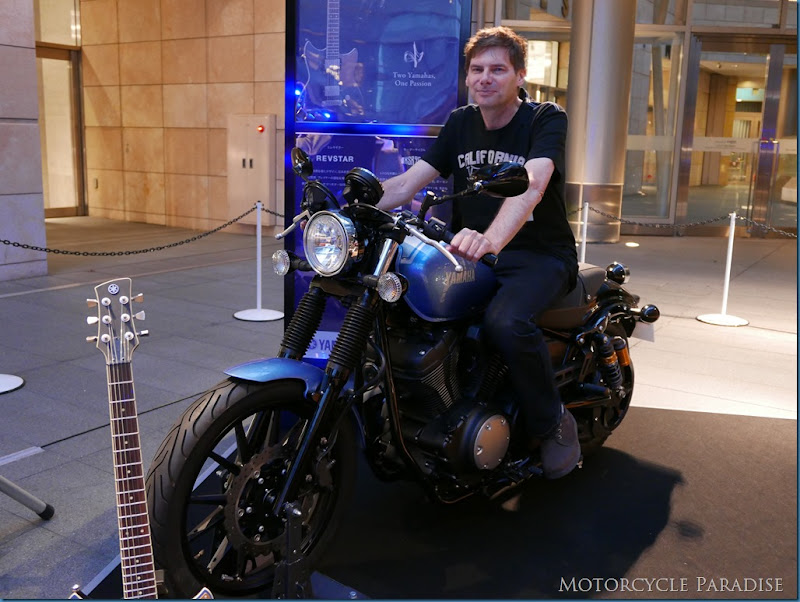 Based on the Yamaha XVS950 Bolt the Bolt C-Spec above was a bit of a surprise. I had taken a few photos with the Yamaha REVSTAR guitar that is mostly out of frame in this shot. It is finished in the same blue and I was trying wide aperture telephoto but many people at this event so you have to put up with looking at me again. However this does allow me to show how the C-Spec has a fairly conventional ride position. Feet below not out front, just slightly forward on the bars. Why is that a surprise? Well the C-Spec from most angles projects a lot of cruiser styling and until I got on I had in my mind been expecting forward pegs and foot controls and lower seat – the usual cruiser ride position – which I find not easy on the lower back but that wasn’t the case.

I’ll save you from seeing me again trying to act like I know how to use a guitar. Here are some other attendees fooling around with some of the REVSTAR guitars – another collaboration of the two Yamaha’s as the name suggests. 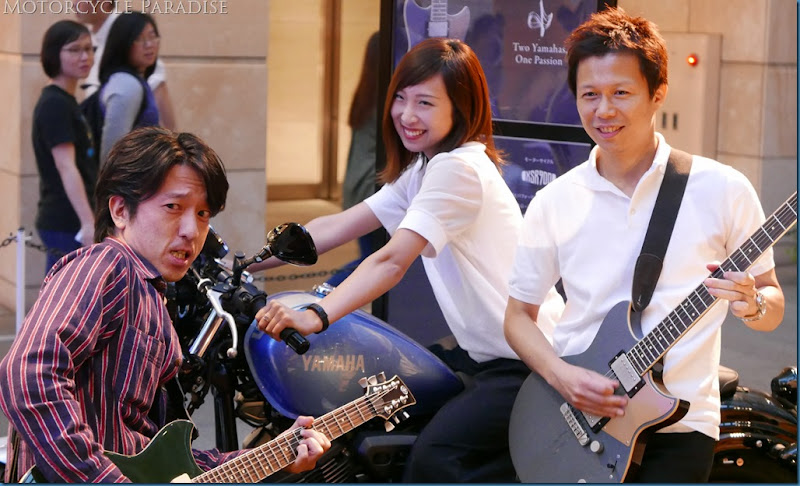 Lastly I had the chance to speak to the General Manager Corporate Design Yamaha Motor who spoke of the synergy between the two Yamahas then let me try out a special project called ‘&Y01’ which is a concept wheelchair with electric assist and a small sail behind that played music to the user reflecting perhaps a collaboration with Yamaha Marine on this project. I was not sure about the sail but the assist technology hopefully can find it’s way to people who use a conventional wheelchair but at times need to call on help for steep ramps. Removing the need for that would be a great boost in independence.

Well it was quite interesting, both the exhibition and learning about media events. Missed having my old Olympus and fast lens, but did the best I could with my little compact camera when able to squeeze in between all the pro SLR’s. Thanks to Yamaha for the invite, it was fun.