I have been very happy with my Nolan N43 helmet which I have had for 6 years. A replacement liner gave it a new lease of life however I recently discovered there is a legal issue with my third party vehicle insurance if I have an accident wearing a non Japanese approved helmet. That is, one with a sticker saying this helmet meets safety standards for Japan. I thought it best I do something and brought the replacement of my N43 forward. Since I am in the land of many famous helmet manufactures I naturally went to look over all their wares. And despite the pricing for Japanese made helmets here being much better than Australia I came back to preferring the successor to my existing helmet – the Nolan N44. 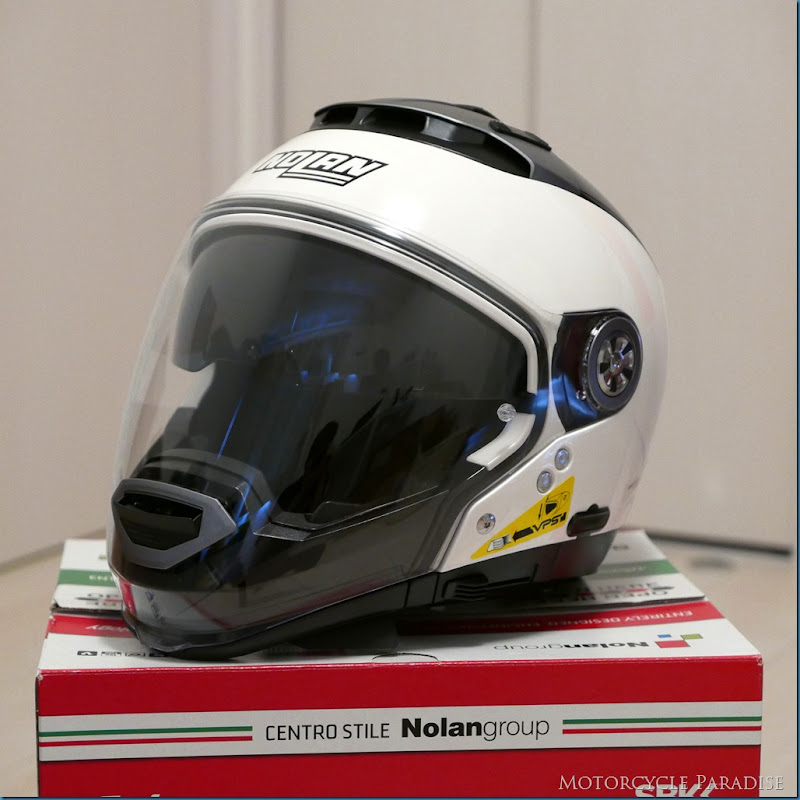 The main thing that kept me wearing a Nolan is the huge view angle their helmets have compared to the others. Your side vision is significantly wider compared to normal helmets and your forward vision is unlimited. Once you get used to this it is very hard to wear other helmets that restrict your vision. When I used to swap from my N43 to my Shark RSR2 Carbon I previously owned I noticed the two blind spot areas either side from the restricted vision on the conventional Shark helmet. Having the extra level of vision is to me a safety element when I ride. When I rent a helmet overseas like I did recently in Spain and Sicily I immediately noticed the closed in feeling both helmets conveyed to me despite being quality items in their own right.

The second thing I like with these helmets is the massive venting systems which make these excellent air flow helmets since I tend to get very hot wearing conventional helmets. If you don’t wear earplugs then I would not recommend you look at these helmets because good venting equals more wind noise. (see update about noise level below) 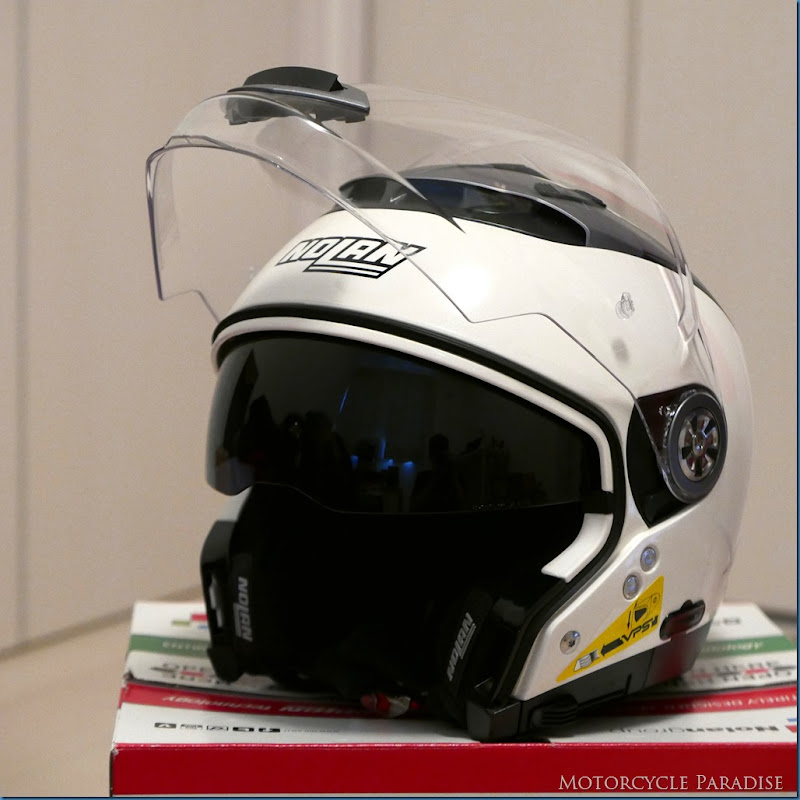 Both these helmets are modular. The chin section can be removed to convert them into jet style helmets. The N44 can further be converted into adventure style helmet as it comes with a peaked sun visor but that requires the removal of the normal screen and use of goggles. I do not think it was designed primarily for that sort of use, rather most people wear these as jet helmets. 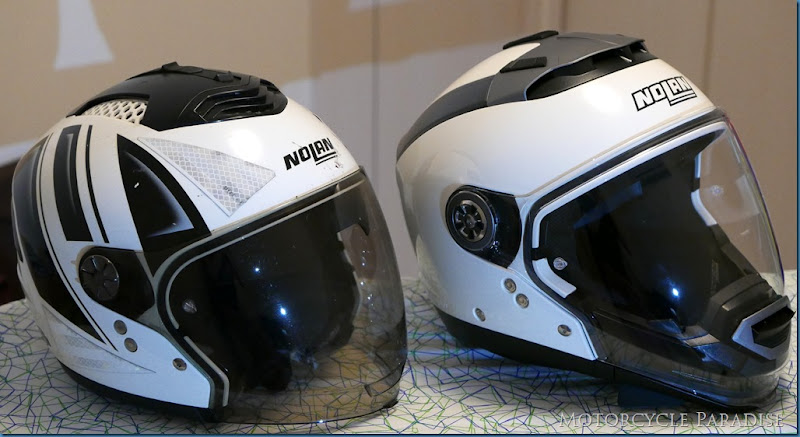 Everything seems slightly different to my N43 pictured above with its chin section removed.  The N44 has a redesigned visor with vent which I hope will be good in the rain. It comes with pinlock visor as well in the box which is surprising and a generous free item. The top vents have changed from the large passive vent on the N43 (note mine is the N43 ‘Air’ version) to three large air intakes on the N44. Lucky I have a windscreen on the FJR, these might fill with bugs otherwise. The internal tinted sun visor has a different lever and it comes down a little lower then the N43 which is nice. It also has one touch button to retract automatically by spring loaded mechanism. The finish is very nice and everything has a solid feel and overall you get a sense of high quality. 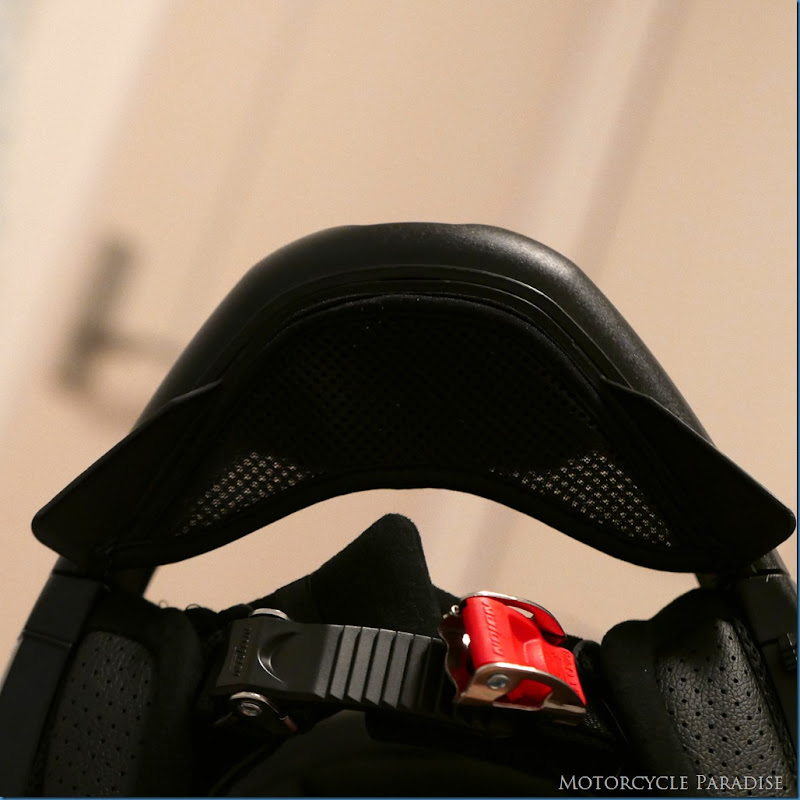 There is a place to install the Nolan NCom system still. The chin section is revised and has two winglets either side and mesh fitted underneath. Not entirely sure if this is for reduction of noise or turbulence since with the FJR screen up I am well protected from the elements but I will expand on this in my long term update in a couple of months. I chose white again because I have come to like that best in helmets, less heat build up than a black helmet.

Liner is very plush, nicer perhaps than the N43 but not say Shark or Arai helmet soft however I find those get hotter against my face where as a slightly more open weave of the Nolan breathes better. Same ratchet style fastener rather then double D ring. Having used so many different brands of rental helmets I adapt to either system without giving it a second thought.

The N44 has the DOT and European ECE safety certificate. So far no rating on the SHARP test site but given a leading engineer from the Birmingham University has cast doubt over their impact testing perhaps need to rethink the current focus on helmet shells. Helmets need to reduce the G force transferred to the wearer upon an impact. There hasn’t been significant innovation in this since Bell put a polystyrene liner into their Star range of helmets in 1968. We still rely on foam polystyrene as a liner to reduce the impact speed as our brains can only survive modest sudden deceleration. The shell of a helmet also needs to absorb some of the impact. It is engineered with enough flex and give to dissipate some of the energy yet be strong enough to stay intact. That’s a difficult balance while also remaining light and thin. The people pushing the stronger harder shell must be better notion are overlooking the trade off is harder shell absorbs less G force so the wearer might end up worse off. I really would love to see a breakthrough in helmet safety regarding reduction in G force in impacts but for now all you can do is choose a quality brand and product that fits you well.

So anyway how is the N44 on the road. I will give initial impressions then return to this post again later. It is comfortable for sure. I’d say a little quieter than the N43 but this is just a small round town ride. Venting is excellent. Stability seems fine and weight seems about same as the N43 which was not as light as something like my RSR2 Carbon but not heavy like a flip up modular helmet either, just average. I will refresh all this more after my upcoming big tour. I wish I had got the light tint main visor. I may end up getting one like I had on the N43 but will try the clear on my next tour see how it goes. So far all good.

Update after 17 day tour
First the bad, the visor fogs up terribly in cold or rain and the new bigger visor vent flows very little air and is weak design point compared to the original which with just a slit in the visor managed to flow enough air to clear fog quickly yet not become a cold draft. Even applying anti-fog spray I had terrible fogging, the visor vent seems to be totally ineffective. I will have to use the pinlock visor on future tours which adds another layer of plastic to look through that I did not want. I have bought another brand of anti-fog spray to see if perhaps my existing one had passed by its shelf life perhaps.
The opening of the main visor on the other hand is great, I can position it at a slightly open amount unlike the N43 which is open or closed only.

The top helmet main vents never completely seal closed thus in cold weather there is a very slight bit of cold air leaking in, this could be a real problem if on a naked or adventure bike. Behind my screen the affect so far has not been too bad but like the visor this is disappointing. In heavy rain this lead to water entry as well. After a 1/2 day in heavy rain the helmet was quite wet inside. The old N43 even in full day of rain was never like this. I can only think I will need to tape over the vents if I strike a lot of rain on future tour which is not good.

The vent operation in warm weather however is excellent flowing considerable air more cooling affect than the N43 venting.
The aerodynamics are ok, I think the noise is maybe a touch more using it in Jet configuration but with the chin piece in place the noise lessens. I like the one touch spring loaded retracting internal visor, nice feature that is well executed. Taking me awhile to find the new lever to lower the visor but that is to be expected after so long using the old one.

Comfort level is very good, the liner is excellent and fit also, easy as good as my Shark helmet which was nicest helmet I have worn comfort wise. However the main vent does not seem to seal 10% which is a problem. I will work the lever back and forward for awhile and see if it then perhaps beds in somehow, I cannot imagine the design being not to seal but rather some slight variance in the molding or part operation that is letting things down.

Update – Well I have been using my old Noland N43 more than the new N44. Overall I prefer the old helmet due to better main visor. I purchased a new main visor for the N43 to replace the light smoke one that had a few scratches which was bit expensive but with the fairly recent replacement liner it does not feel like an old helmet so I hope I can get the monies worth from the replacement visor. I will be using this when I travel and the N44 only in Japan for legal reasons at this stage. There N43 is not available anymore but there is another model that sits below the N44 called the N40 which is similar so I would recommend looking at this before the N44.

Further Update May 2017. Another two weeks riding with the N44 in Japan and I note the noise from the vents when the main visor is closed is really much more than I initially noticed and can be excessive at times. Yes it flows lots of air but it is far too noisy even with earplugs. I actually wear it like an open face mostly with the main visor up thanks to the big screen on the FJR and surprisingly with the screen up it works aerodynamically ok and is quieter than with the main screen down.

Long term update- I have gotten used to the N44 now. Actually it is more comfortable by far than the N43 and the noise issue seems to have settled as I learned there are 3 vent controls and you can close one to make it quieter. Even the fog issue can be controlled with better anti fog but you need the best available.

The Journey is the Destination