I visited the Kawasaki world in Kobe Japan. It is not a large display however reading about the other things Kawasaki build was of great interest. For example I knew they made some of the trains operating in Tokyo however not also many other cities trains in Japan and Asia as well as the first and most of later and current Bullet trains in operation. That impressed me considerably.

In addition to this they make a lot of large cargo ships, Helicopters, Planes – even space launch vehicles and high rise buildings and bridges including the one to Shikoku I rode a train over yesterday. Of course the bikes are what most people associate with the name. 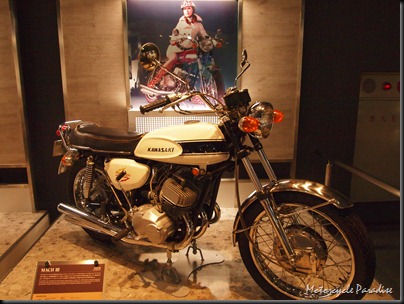 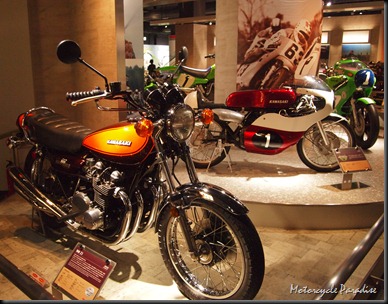 Two legendary machines. The Z frame is stamped number 00001. The H1 is was my favourite Kawasaki displayed. Besides the obvious timeless looks what other company can say they released a road bike with 20% more power than current grand prix racing bikes at the time.

It is a small centre for such a huge company, if passing by then sure take a look but I cannot say it is worth a special trip.