Dumb arse things, I have done them all. And near the peak of this stupidity I started on motorcycles. I used to ride like I was in a Mad Max movie and wonder now how I survived. With my mate from Alstonville NSW we treated the country roads as a playground and speed was frequently as fast as our Kawasaki 750’s would go. Fortunately power was only half current superbikes so generally speaking they did not easily out accelerate their braking.

I used to be a fan of that movie as a teenager. At the time that was considered silly. Even fans of that other late 70’s movie Star Wars did not say so openly if older than 16. I lost my curiosity with that movie by the time I was in my twenties but it has since gained a cult following, no where more so than here in Japan. It’s not just the Kawasaki Z1000’s which perhaps trigger nostalgia and pride, there is something else that makes the Japanese really love that movie. Those scenes of bikes at speed on public roads in the wide Australian landscape mesmerise riders here in the concrete jungle. I was reminded of this seeing the movie play again in the Naps motorcycle accessory superstore Yokohama.

Made me feel fortunate to have ridden those sorts of roads, but more fortunate that I survived that stage of my life. A lot of luck has come my way, none more so then to escape some high risk stages like this by some other diversion. In this case I tried dirt bike riding on a whim and instantly was attracted to this new riding challenge so sold my Kawasaki ZXR750 after just a brief foray into speed. By the time I returned to the road some years later I had far better riding skills but more importantly did not feel the need to belong to a motorcycle scene thus escaped from that competitive environment a group of males generates and which can be so dangerous. 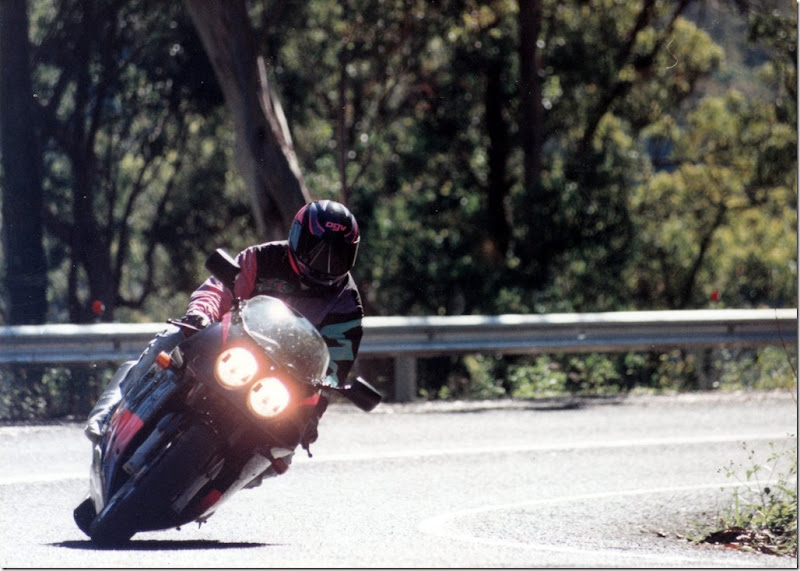 This photo is the oldest I have of myself on a bike although not my first motorcycle. Bit deceptive, it’s actually just a slow switchback corner. Note the hair on the print, this is a scan from a paper photo, somewhere about ‘94.

I had no idea Mad Max was so popular over there. I remember enjoying it in the 80's in high school, but to look back on it now I dunno.

That picture is great at showing the contact patch of a tire in a corner.

I never knew either Brandy but the Japanese really have a thing for it that goes beyond what I can fathom.

In the 80's I saw it at the drive-in movie theatres. Australia shares the car culture with North America and is to my knowledge the only other country to have drive in movies. Mad Max 1 turned up as a support movie for years shown before feature movie, usually when the feature was some crap rip off of the genre. I never had a licence then but often someone would pick me up and we all sit in the back of their pickup truck on a mattress under the stars.

Looks like a 93-94 ZXR750, my mate had a green 93 model. I absolutely loved that bike, the induction roar from the engine and the front end that just felt planted.

5 things that have improved my ride photos