They say our hands are often the least well protected body part when riding. Not sure where they get their data from. I suppose that is referring to summer and riders with light weight gloves or no gloves, winter you would imagine that does not apply.

Used to be difficult to find good summer gloves but really so many choices these days.  That said many are quite flimsy and would offer little to no protection. I have had a couple of the light construction summer gloves recently. The Spyder brand pair I got in Philippines was all genuine leather construction and quite good quality but rather thin leather that was probably no better that the Yamaha brand synthetic leather and mesh gloves I got in Thailand.

Previously to those I think I was using some O-Neil moto-x gloves which were similar materials to the Yamaha shorty gloves but with extra material and padding and were fairly robust although besides the hard knuckle protectors none of these gloves would offer much abrasion protection. Then of course I shudder thinking back to when I first started riding and was a squid wearing next to no protective gear. As well as having no protection I was lacking skills and riding mostly like an idiot. Well that’s part of growing up for some men I guess and I am happy to have survived.

Nearly all the riding gear sold here in Japan is cheap Chinese stuff with names stolen from old motorsport days like ‘Elf Racing’ or ‘Simpson’ as in the drag racing company which looks funny on a range of rider apparel and closer inspection shows it to be the low quality sort of gear you can buy on eBay from China very cheap with some made up brand name attached to it. The usual brands from Italy and USA are oddly non existent in Japanese shops (I’ve searched high and wide) RS Taichi is one of just a couple of lines of quality rider equipment I have seen on sale here (besides helmets which of course you are spoilt for choice) 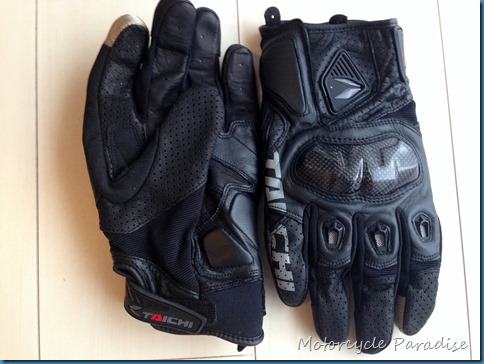 So getting back to these gloves, this is the RST410 summer glove from RS Taichi. It has a rather complex construction compared to the usual summer gloves with different layers added and a mix of different thickness (types of) leathers in different areas of the gloves as well as use of textiles, hard plastics and carbon fibre.

They are mostly comfortable but I find they tend to rub my hands in a couple of places and after a few days of riding I am getting red marks on skin. I tried using some anti chaf but the gloves are not as comfortable as they should be.

Ventilation is acceptable but a little below what you might be wanting in a summer glove. My hands still get quite hot and air flow is limited.

On the flip side to these points the gloves are offering a higher level or protection than any other summer glove I have previously owned.

The index fingers have a small part that will activate a touch screen on a phone (seen as gold colour in photo) and so far I am using them no major issues.

Update October 2015. I think they became a little more comfortable but still the cut or multi layers seem to bind or rub on me at times.

Update, still using theses 2019, no problems with their build material as far as quality, they will last a long time but I am looking to replace them with something more comfortable now.