I had the pleasure of being able to ride a near new 2015 Yamaha MT-09 Tracer around New Zealand for 9 days so it seems fitting I put a few words to paper. 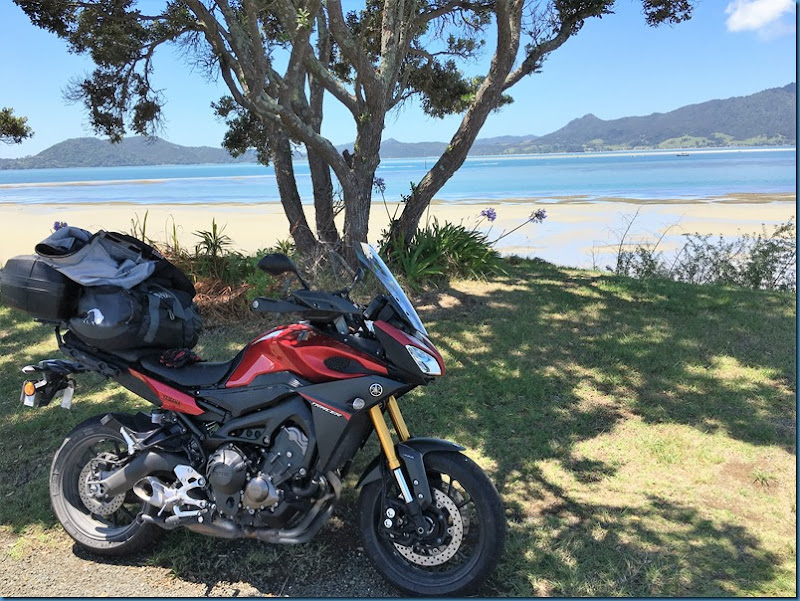 Ergonomics seemed to work well for me (I am 6’ tall) Seat to peg distance was excellent, I never experienced any cramps in my knees such as I can get with bikes that have higher or rearward pegs. The bars sit a little further forward than something like the Versys so I had a ever so slight lean forward to reach them but they are generous in size so that width offers plenty of leverage. The brake lever is adjustable and easy to engage. The clutch lever is non adjustable and the lever is a long way away from the bars so I could barely reach it with my fingertips however the pull is light and easy as well the clutch disengaged with just a small move of the lever so again no problem.

Seat is firm and a little narrow at the front which with the reach to the bars is where I found myself always sitting. Initially 35 minutes I was looking for a break which did not bode well for a long tour however I got used to it and could stretch my seat time to about 50 minutes to an hour by end of tour which is fine but I might add a pad if I owned one still it is far better then any sports bike seat but I ride a FJR which is like a lounge so keep that in mind.

Switch gear is the new Yamaha layout like my FJR with the kill switch also the starter and the old starter button a hazard light switch, it really is a great setup. Same as my FJR resetting the trip meters was bit difficult and I gave up trying. no need to when you have good fuel range which this bike has. The instrumentation is a smaller version of what I get on the FJR, not as comprehensive a set of data readouts but it has all you need in two LCD screens.

Two issues I found were the fuel gauge would stay on full until half tank then drop and then the next bar would drop not so long after so the fuel level sensor setup seems to not be very good or perhaps mine was faulty. (and so I guess if that was the norm then resetting the trip meter would have been handy) The other issue I had was the large flat rectangle perspex covered dash would reflect the sun straight back up at my eyes providing some glare for a portion of the day.

The bars had very little vibration that I could detect. The handguards I guess are purely a styling exercise because you would never be taking this bike through the bush. They perhaps defected a bit of rain from my gloves. They did not obstruct air entering my jacket sleeves when over my gloves which I was thankful for in the hot conditions. The fly screen actually worked ok which is a major plus as the Versys and Vstrom screens (I have ridden) are not very good but this one did not create turbulence and whilst limited in what wind it could deflect it did a much better job than I expected.

The side stand was a wee bit short and had to pay attention to where I parked it as the lean angle was greater than I felt comfortable with at times. Lifting the bike from the side stand or reversing was easy – but then I am used to a very heavy tourer. Starting the bike you have the unique 3 cylinder raspy sound and while riding you can enjoy this sound still with the standard muffler which I thought offered a terrific sound back to the rider. The throttle has the same firm return spring found on my ride by wire FJR and I do prefer lighter throttles such as Honda offers but your going to adjust to whatever you are riding.

The engine probably has more power than I could use on public roads haha. I have no idea the figures, you can find that sort of thing from the motorcycle e-zines that always fill their reviews with endless data from the press release and very little real feed back about the bike. Passing anything is just an easy twist of the wrist but you need to not be too low in the rpm range. There is good torque but you cannot be totally blaze’ about what gear your in like say on the FJR which will surge forward at 2000rpm in top. Drop a couple of gears and the acceleration becomes very strong indeed. I felt no need to explore the upper rpms except the one time just to say I had been there. More than enough on tap in the midrange which is where the 3 cylinder works so well and sounds so sweet. Nice to feel you were using a little of the engine even though the upper power delivery is too much for twisty back roads. I guess this is where a 600 has an advantage in that you can actually enjoy more of a smaller engine, more often. Which as I have blogged before makes me wonder wtf it is with people wanting more powerful engines all the time which on public roads will spend all their time lumbering along below their sweet spot, but I digress.

Having owned a Speed Triple the MT-09 reminded me how enjoyable a 3 cylinder can be. Fuel economy on my old Triumph was woeful, despite the decent tank size I ran dry of fuel at 180km one day (ok I had been riding it bit hard) The MT-09 will do more than 300km, I know because I did that first tank forgetting I was not on the FJR and ending up on reserve. It probably had a good 40km more to bone dry but don’t go testing that. That mileage reduced as I started to exercise the engine more on later days. There are 3 engine modes but you know what I really wasn’t interested. If its raining use the throttle more gently. Want to go a bit faster hold a lower gear or two and let the engine rev. It is not rocket science. But all jokes aside the default standard mode was great all round and I used it on loose gravel and rain.

The gear box was mostly smooth. Easy upshifts but downshifting at low rpm the box was a bit finicky and not wanting to shift easily. Still a brand new bike so I will overlook that. Braking was fine, plenty of feel and power, not needing to apply high force to the lever like required on the FJR. Suspension was firm-ish but never harsh and worked well. The bike was nice and neutral steering and holding a line. Easy to flick in and change direction. Bumps did not unsettle it. Very confidence inspiring, I felt at home immediately and it required so little effort or thought on my part.

Some of that praise must go to the Michelin Pilot Road 4 tyres which were terrific but the MT-09 is a very nice chassis and feels balanced and planted on backroads with their typical mixed surfaces. No drama to tighten up a line on a unseen decreasing radius corner or rapid change of direction on blind corner tight roads. It really brought it home to me that as much as I like my comfy armchair tourer here in the cold weather I have perhaps been missing out on some of the joy of riding having it. Still I have enjoyed every ride on the FJR.

I could U turn the MT-09 on a dime as the saying goes, the centre of balance must be reasonably low. U turns on the FJR are scary, feet down but that is partly my skill on a bug bike being lacking, the police here spin them around like 125’s.  I did some gravel/dirt riding on two occasions. On loose stones the MT-09 was a bit of a handful, as any large road bike with road tyres would be. These bikes might be marketed as adventure machines but you honestly would not want to be doing a lot of loose gravel roads on them let alone anything like actual off road in my opinion but perhaps more dual purpose tyres would help. I have ridden heaps of dirt – but on proper dirt bikes where sliding about is fun and something you do deliberately.

Having the MT-09 mildly crossed up in a slide was not something I would want to explore again. Leave that to the experts they hire in the promo videos. Looks wise I think it’s styling is quite good for this class but having ridden the others what I like more about the MT-09 is it seems to do everything a little better. The engine is more than I need but so flexible compared to the twins in the Versys and Vstrom. Handling is a much nicer but the Vstrom with the 19” front would have been better on the gravel no doubt.

The ergonomics of all three are fine but the aerodynamics of the MT-09 is leaps ahead of the other two. Couple of niggles aside it really is a great package and a serious contender to replace my FJR in the future with perhaps some heated grips fitted if I can forego some of my bikes luxury. Of course what I would really like is Yamaha to actually make this the base for a tourer but that seems unlikely since the FJR1300 is mainly a US market bike where more is always the right answer

I had a great time on the Yamaha MT-09 – Read about my ride in New Zealand HERE. This article was originally posted to Motorcycle Paradise Blog in February 2016.